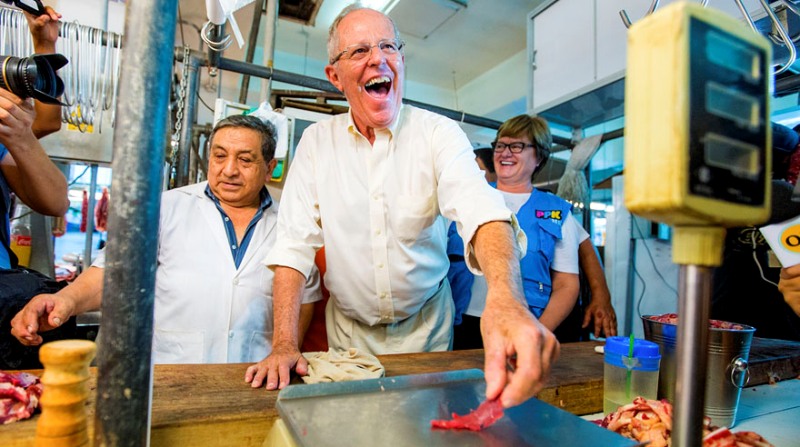 A new poll indicates that Pedro Pablo Kuczynski would narrowly defeat frontrunner Keiko Fujimori in a runoff vote as the anti-Fujimori vote begins to materialize.

The Ipsos poll published Monday confirmed the order of the top five candidates in the first round of 2016 elections with Fujimori winning the most votes followed by Kuczynski, Alfredo Barnechea, Veronika Mendoza and Alan Garcia. But it surprisingly showed Kuczynski defeating Fujimori in a runoff vote with 40% to 39%. Meanwhile, Barnechea, Mendoza and Garcia would each lose a runoff to Fujimori by two, five and 27 points respectively.

While Kuczynski’s one-point edge is within the survey’s margin of error, the new poll is the first in this election cycle to yield a result with any candidate defeating Fujimori in a second round of voting.

“I am ready to debate Keiko,” Kuczynski told RPP after the poll published. “The Peruvian people do not know what she has done, and we all know that she is just inheriting the legacy of her father. They know me for my work and experience. We’ll see what happens.”

Kuczynski added that he would defeat Fujimori in a second round by “knockout.”

The former Cabinet chief and finance minister had been briefly surpassed in the polls by “outsider” candidates Julio Guzman and Cesar Acuña, both of whom have been barred from the election. With less than one month to go in the race, various anti-Fujimori movements have sprouted up across the country.

After a disorderly demonstration against Fujimori in Arequipa last month, a mob threw rocks at a Fujimori rally in Cusco last week, prompting El Comercio to call on Veronika Mendoza and other anti-Fujimori candidates to condemn political violence. On Tuesday, thousands mobilized in downtown Lima for a peaceful march against the daughter of jailed former President Alberto Fujimori.

“With only a few weeks until the first round of voting, it is likely that the ‘antis’ will start watching the second and third positions if they are relatively close, and support one or the other depending on who is first,” GfK pollster Hernan Chaparro told La Republica. “As it’s likely Keiko Fujimori [will advance to a runoff], they will look to see who in the second or third positions seems the most capable to face Fujimori in the runoff. That is going to move much of the vote.”

Kuczynski seems to have set his sights on his closest challenger to the runoff, Alfredo Barnechea. Kuczynski told RPP that Barnechea never even met his party’s founder, former President Fernando Belaunde, while Kuczynski served as a cabinet minister in Belaunde’s government. He added that Barnechea was an APRA party member during the first government of Alan Garcia.

“The big problem is that Barnechea and Mendoza don’t know what they want to do,” former labor minister and Peruvians for Change congressional candidate Juan Sheput told La Republica. “Their experience in management is zero. What have they done in their lives?”

While Fujimori faces increasingly frequent protests and counter-demonstrations at her rallies, the fight to qualify for the runoff has heated up between Kuczynski, Barnechea and Mendoza.

Peru’s general elections are scheduled for April 10. If necessary, a runoff will take place on June 5.