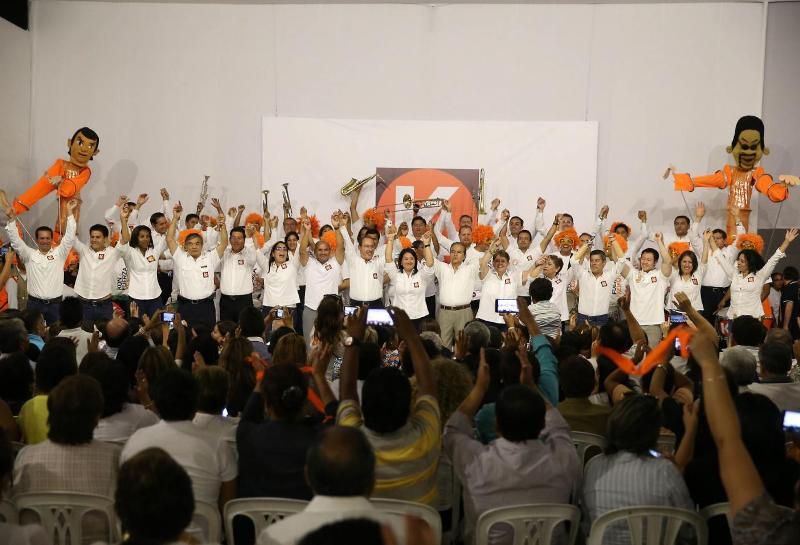 A recent poll showed Keiko Fujimori’s Popular Strength party will win 49% of the seats in Congress in Peru’s 2016 elections.

The Ipsos poll taken last week and published on Sunday forecast that Popular Strength will garner 35.8% of valid votes when Peruvians go to the polls on April 10. When eliminating the votes cast for parties which do not make the 5% elections threshold, Fujimori’s party stands to have 64 members in the 130-seat legislature.

“If Popular Strength manages to achieve an absolute majority (66 seats or more), the result could have a favorable impact on their candidate in the runoff election,” says Ipsos pollster Alfredo Torres.

The poll predicts six parties making the elections threshold and thus qualifying to have their candidates seated. According to Ipsos, Pedro Pablo Kuczynski’s Peruvians for Change party would take 25 seats followed by Veronika Mendoza’s Broad Front party with 24, the Alan Garcia’s and Lourdes Flores’s Popular Alliance coalition with seven and both Alfredo Barnechea’s Popular Action and Cesar Acuña’s Alliance for Progress with five each.

While Popular Strength would not control a majority of votes outright in Ipsos’s scenario, the party would only need two additional votes to command 51%. So an alliance with any of the five other parties would easily pass Fujimori’s initiatives.

While brokering a deal to control the legislature would not be difficult given the numbers, it will be even easier given the little ideological difference between most parties. Both the Popular Alliance, made up of a business-friendly APRA and the hard-right Popular Christian Party, and the Alliance for Progress advocate center-right platforms.

While Kuczynski’s Peruvians for Change party is doubtful to team up with Popular Strength if the two longtime frontrunners go head to head in a second-round vote, an alliance between the next Congress’s two strongest parties could not be ruled out if the runoff features Fujimori against the leftist Mendoza instead of Kuczynski.

In a move which may serve two purposes aside from adding showmanship to an otherwise dull debate, Fujimori pledged to give control of two key congressional committees to opposition parties in the next Congress. Her “Commitment of Honor” effectively denounced the worst elements of her father’s government while maybe sparking a competition among the smaller parties to be the first to enter an alliance, if not compete for one.

Fujimori’s proposals for 2016 include tax breaks for small businesses, allowing communities to become shareholders in mining and energy projects and building more prisons to accompany a zero-tolerance policy for minor crimes.