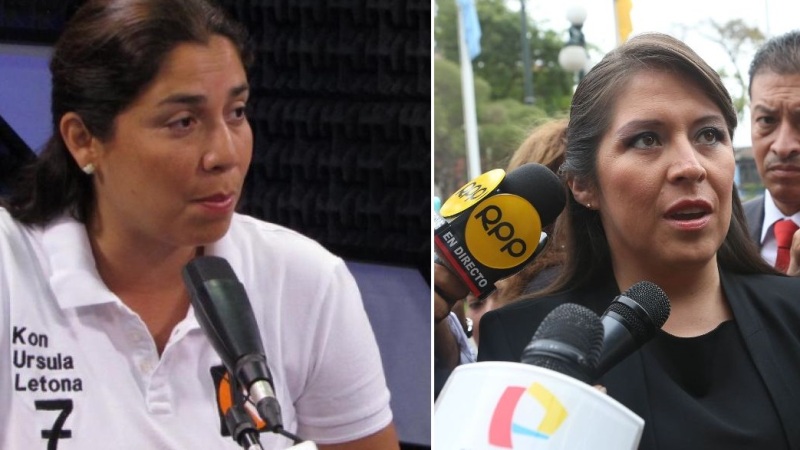 The possible defection of a high-profile member of the Popular Force party which controls Congress illustrates the precarious state of Peru’s political parties.

The 38-year-old former attorney and chair of the congressional oversight committee has threatened to leave Popular Force, which controls 73 of Congress’s 130 seats, in a feud over a bill aimed at strengthening Peru’s public prosecutors.

Vilcatoma rose to national prominence when she was fired as a public prosecutor over what she alleged was former President Ollanta Humala’s refusal to investigate corruption in the Ancash state government of Cesar Alvarez. Her name lent credibility to the party of Keiko Fujimori in 2016 elections, but now she may leave over a lack of support for her bill to create an independent prosecutor’s office.

“I ask all members of Congress to prioritize the fight against corruption,” Vilcatoma said after a public argument in Congress’s legal committee. “This is not about running your mouth for some personal interest, but an obligation that concerns us all. No wonder Ursula Letona is trying to kill this proposal even though Keiko Fujimori has endorsed the idea of constitutional autonomy for prosecutors and that they be appointed by the National Judiciary Board.”

Fellow Popular Force congresswoman Ursula Letona has backed APRA congressman Javier Velasquez’s proposal which would create an empowered attorney general’s office, albeit within the justice ministry or other organization in the executive branch. Velasquez’s is the third challenge to Vilcatoma’s proposal. The other two came from Popular Force legislators.

But Popular Force members who don’t agree say Vilcatoma is trying to control all of Congress’s investigations and should leave the party if she’s not happy.

“[Vilcatoma] is blackmailing [us by threatening to leave], and she has already been given everything she asked for,” a source inside the party told El Comercio. “The problem is that she is like an octopus that wants to control everything when it has been agreed that there are issues which are special cases and should be looked into by other committees.”

Vilcatoma may be Popular Force’s first high-profile defection just two months after taking office. Some analysts say the party may have as many as four factions.

“Seventy-three is a very large number to keep everyone happy,” writes Enzo Defilippin in El Comercio. “Not enough official spokesmen, committee chairs or working groups for everybody to be a leader. It is also enough [members] for several rival factions to form – veteran vs. freshman, Lima and provincial, official members and guests.”

Popular Force has quickly moved to contain the damage by proposing a bill which would punish legislators who defect to other political parties. The law would prohibit members of Congress who change parties from chairing committees or serving on the presiding board.

While Vilcatoma could be the first defection from Popular Force, she would not be the first in the current Congress which was seated on July 28.

Party defections are common in Peru’s Congress where political parties are young with policy platforms which are ambiguous and subject to change.

“Usually defectors who switch parties are driven by personal interests rather than any political or ideological agendas,” Paolo Sosa, political scientist at the Institute of Peruvian Studies, writes in El Comercio.

Sosa says politicians jump ship if they think it’s necessary for reelection or to win concessions such as a committee chair or a legislative initiative for their constituency. However, he does not see any major repositioning of the power balance in Congress before 2018 regional elections given Popular Force’s position.