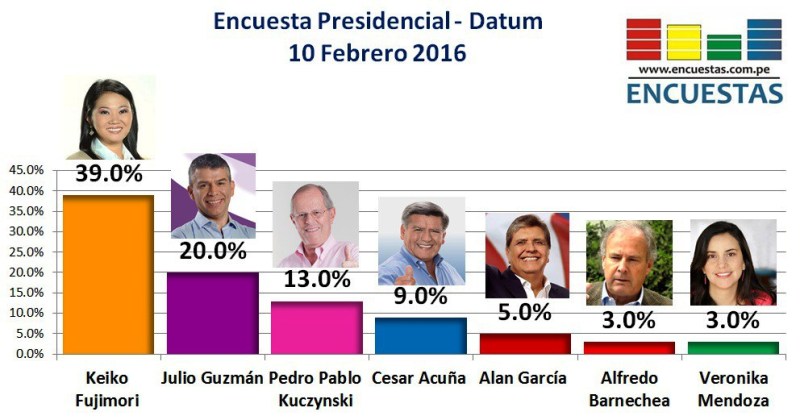 A new opinion poll showed voter support for economist Julio Guzman had surged to 20%, giving him a clear edge over Pedro Pablo Kuczynski and Cesar Acuña to qualify for a runoff.

In addition to Guzman’s surge, Fujimori increased her base of support from 32.1% in Datum’s January poll to 39% in February. Other surprises included Cesar Acuña drop in support from 15.2% to 9% as well as the diminishing status of former President Alejandro Toledo.

Fujimori led the field with 39%, followed by Guzman with 20%. Kuczynski took third place with 13% while Acuña fell to 9% and former President Alan Garcia maintained his longtime level of 5%.

“We have filed the appeal and the legal argument is very solid,” Guzman said in downplaying the poll, instead focusing on his appeal of an election board decision nullifying his political party’s national committee’s selection of him as their candidate. “The scenario we are hoping is that the elections board will rule in our favor.”

The poll was taken from Feb. 5 through Feb. 8, the peak of the scandal involving Cesar Acuña’s various plagiarisms as well as the marketing and appropriation of a University of Lima professor’s book as his own. More than a third of Acuña’s support evaporated, falling from 15% to 9%.

“I’m happy with the numbers,” Acuña told reporters. “Having gone down to 9 despite everybody having treated me like a piñata.”

Support for former President Alejandro Toledo, who had fallen to sixth place in the last Datum poll, fell from 3.2% to just 2%. His collapse put him in eighth place, being surpassed by leftist candidates Alfredo Barnechea and Veronika Mendoza, each of whom garnered 3%.