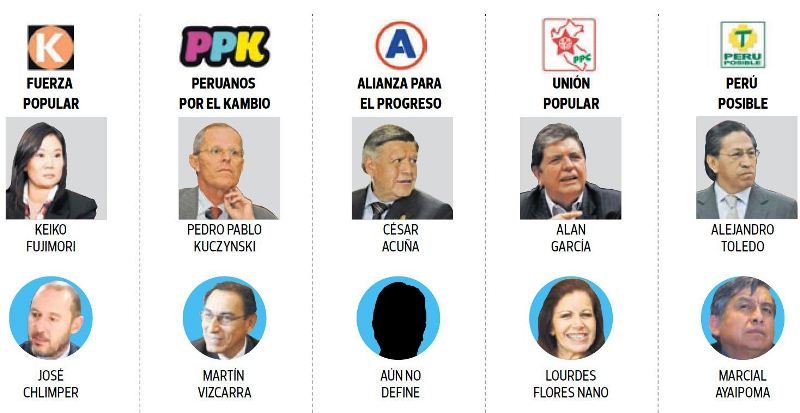 All but one of Peru’s leading presidential candidates have selected their vice presidents for 2016 elections.

Leading presidential candidate Keiko Fujimori, the daughter of former President Alberto Fujimori, has selected Jose Chlimper and Vladimiro Huaroc as her running mates. Chlimper is the former agriculture minister under Fujimori known for derogatory statements against the Callao dockworkers union. Huaroc is a former governor of Junin as well as the head of a social relations office created under President Ollanta Humala which looks to gain community approval for mining and energy projects.

Former President Alejandro Toledo, whose support has yet to his double digits in opinion surveys, has chosen former congressional president Marcial Ayaipoma and Carmen Omonte, a former women’s minister under Humala. Toledo’s picks prompted the resignations of Daniel Mora and Luis Thais, two of the Peru Possible party’s most visible leaders.

In rounding up the vice presidents for each candidate, what may have been the biggest surprise came at the end with ruling party candidate Daniel Urresti’s choice of former Lima mayor Susana Villaran as his first vice president. While the selection of Villaran looks to reinforce the Nationalist Party’s liberal position, the liberal figurehead was forced to defend her alliance with the former military intelligence chief on trial for the murder of a journalist.

Analysts have noted that the presence of three former governors from Junin, Moquegua and Apurimac illustrate the candidates’ aim to connect with voters from outside Lima.