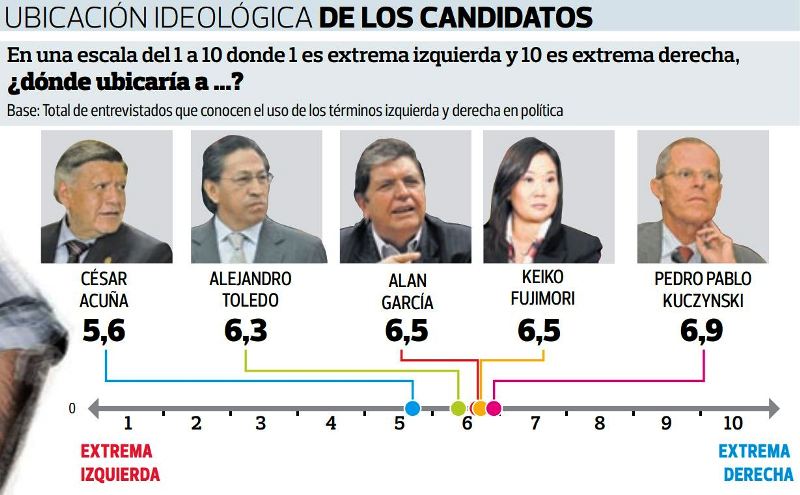 Ipsos asked over 1,800 voters to rank each of Peru’s 2016 presidential contenders on a scale of one to 10, with one being “extreme left” and 10 being “extreme right.” All five candidates placed within 1.3 points of each other and less than a 15% deviation from the center.

The candidate farthest to the right according to public opinion was former Cabinet chief and World Bank economist Pedro Pablo Kuczynski, who came in with a center-right score of 6.9. Interestingly, the farthest candidate to the left was former La Libertad governor and Trujillo mayor Cesar Acuña, whose score of 5.6 still placed him to the right of the scale’s midpoint of 5.5.

The 2016 election is the first time in recent history that Peru’s presidential candidates have shown so little political differences. In 2011, candidates Ollanta Humala and Keiko Fujimori ranked 3.2 and 7.1 respectively. This year the two leading candidates differ by less than a half point.

In 1990 all three established politicians ranked between 2.4 and 4.4 when Mario Vargas Llosa came on the scene with pro-business policies which placed him at 8.3. Alberto Fujimori ultimately won that election with a message that voters ranked a centrist 5.5.

The 1990 experience begs the question if there is room for a hard-left candidate to change the election dynamics. But Peru’s political left is currently splintered between at least four political parties: the ruling Peruvian Nationalist Party, Broad Front led by Veronika Mendoza, Dignity and Democracy led by Sergio Tejada and the Social Strength Decentralizing Party led by former Lima mayor Susana Villaran.

Mendoza and Tejada, both defectors from the Nationalist Party due to President Ollanta Humala’s business-friendly policies, have stated publicly they are willing to join forces to prevent a Fujimori presidency. However selecting which one will be the candidate could prove to be a deal breaker. And with 2% and less than 1% of voter intentions respectively, an alliance may not make much of a difference.

The far right is even more splintered. The historic Popular Christian Party (PPC) is going through an internal struggle for control between party leader Raul Castro and former presidential candidate Lourdes Flores over the latter’s proposed alliance with Alan Garcia. Garcia’s APRA party, which was founded as a socialist party, is a historic enemy of the PPC.

Ipsos Peru president Alfredo Torres says that the convergence of the candidates to the center-right reflects the people’s desire for pragmatic solutions.

“[Peru’s political centrists] instinctively distrust politicians and seek concrete solutions for their most pressing problems, but they are also open to hope,” writes Ipsos Peru president Alfredo Torres. “Candidates should strive to approach, understand and target this population. The electorate does not want a slew of populist promises, but attractive proposals under a vision of Peru to be projected into the future with hope.”

The Ipsos survey comes on the heels of a presidential election in Argentina which saw the end of Kirchnerismo, the political policy of former President Nestor Kirchner and Cristina Fernandez. In Venezuela, President Nicolas Maduro is likely to lose his control of Congress with an approval deficit of more than 20 percentage points.

The Wall Street Journal reports that economic populism in Latin America is fading following the collapse of commodity prices combined with high-profile corruption cases in Venezuela and Brazil.