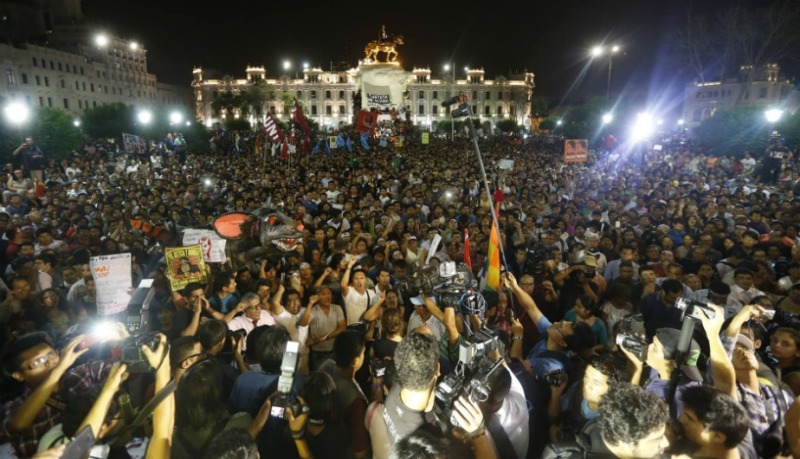 Tens of thousands of protesters demonstrated against presidential frontrunner Keiko Fujimori in Lima and other cities throughout Peru five days before 2016 elections.

The annual demonstration was held on the 24th anniversary of April 5, 1992, the day former President Alberto Fujimori dissolved Congress in a self-coup. La Republica estimated that 50,000 people marched in downtown Lima. Demonstrations were also held in Arequipa, Trujillo, Cusco, Iquitos and other cities.

“Keiko won’t go in the coast, the highlands or the jungle!” chanted the Lima protesters, whose peaceful, two-hour march started at the Plaza San Martin and passed by the Plaza Bolognesi, Plaza Grau and Parque Universitario.

“This is a testimonial of the decision to defend democracy, of the faith in the foundation of the republic based on the defense of freedom,” Gorriti told Andina. “Being here does not mean being in favor of any particular party.”

The protests come as Fujimori has shored up a clear lead in opinion polls and her Popular Strength party is poised to win half of the seats in Congress in general elections this Sunday. An anti-Fujimori movement materialized in the last month which sometimes held violent counter-demonstrations to Fujimori’s campaign rallies in Tacna and Cusco.

The movement made up of various human rights groups and student organizations has adopted the hashtags #KeikoNoVa (Keiko won’t go) and #NoaKeiko (No to Keiko).

“The relationship is clear. There have been photos and videos of a close relationship. They have started these marches,” Fujimori said. “The ‘No to Keiko’ leaders have had meetings with [Humala and first lady Nadine Heredia], and the organizers have worked in the presidential Cabinet.”

However Harvard University political scientist and Peru analyst Alberto Vergara says the march is not political.

“The election of Keiko would constitute severe damage to the self-esteem of the nation, to validate her father’s government,” Vergara told El Comercio.

“It’s the kind of thing that you will be ashamed of and regret, as a Peruvian, in 50 years. It would also be an embarrassment to the international community, to choose the daughter of somebody who stole from you and violated the most basic laws of the republic. It would be a stain on the national self-esteem that will be very difficult to erase.”

“The April 5 coup is indeed condemnable,” de Soto told RPP. “Nobody in their right mind is going to endorse a coup, but Keiko did not have anything to do with the coup. And secondly, we must not forget that in those days the one who declared war on Peru was the Shining Path.”

Despite being convicted for authorizing death squads, Alberto Fujimori is widely viewed as the president who saved Peru from economic collapse and restored security. Keiko Fujimori has recently distanced herself from her father’s government to convince moderate voters. She has purged her party of the politicians who worked in his government and signed a pledge not to pardon him if elected.