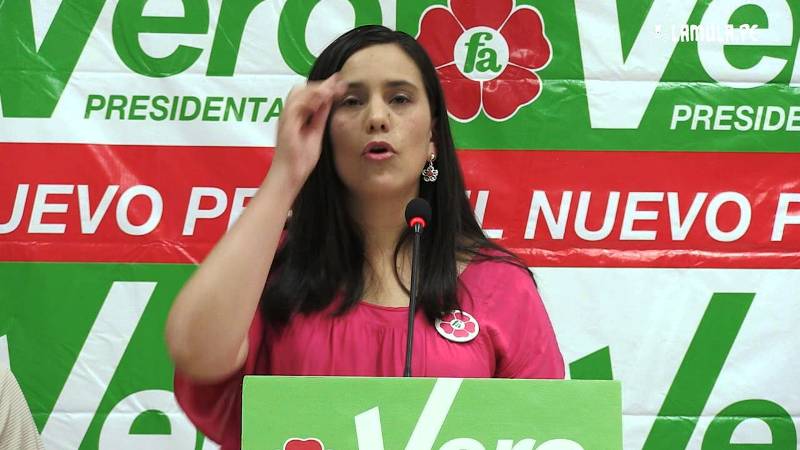 A look at Veronika Mendoza’s policies for 2016 elections after the leftist presidential candidate’s controversial remarks about Venezuela.

As her candidacy was set for a jump into fourth place in opinion polls with the removal of Julio Guzman and Cesar Acuña, Veronika Mendoza stirred up controversy in comments which seemed to defend the Venezuelan government of President Nicolas Maduro while condemning jailed opposition leader Leopoldo Lopez.

When asked about Venezuela in an interview on RBC’s “The People Speak”, Mendoza prefaced her comments by saying that her Broad Front party was committed to democracy and the right to protest. “But from there, should we support an undemocratic opposition, a coup-leading opposition such as the one Mr. Lopez represents? We will not go to that extreme.”

“I cannot call the Venezuelan government a dictatorship because there has not been a coup,” Mendoza said on Canal N shortly after. “There have been elections recently, recognized by the opposition itself. It is not the kind of democracy we want for our country. We want a full democracy for our country where there is the complete freedom of speech and the press.”

While Mendoza drew the ire of Peru’s media as well as politicians abroad, she had gone on the record to criticize Venezuela in the past.

“In Venezuela there is the violation of human rights, and that should be condemned,” Mendoza told La Mula in September. “[Maduro] is a caudillo with authoritarian tendencies, but that is not enough to define the Venezuelan process.”

Mendoza has repeatedly protested against questions regarding her position on Venezuela. However in the wake of a commodity boom which will see the end of windfalls in revenue, analysts want to know how much Mendoza will look to realign Peru politically and economically.

“It is important to recognize that in Latin America there have been governments that have clearly defended their sovereignty,” Mendoza said in the same interview in which she characterized to Lopez as a “coup leader.” “I think that, in Venezuela, Ecuador and Bolivia, this assertion of sovereignty has been very positive, which we still have not done in Peru. We are still completely submissive to corporate interests and big business.”

However it seems Mendoza would not look to go as far as Hugo Chavez did in putting the economy under government control.

“The Broad Front recognizes that the market economy (competitive exchange of goods and services for currency) is a worldwide reality which cannot be removed or replaced by a self-directed or statist economic model,” Mendoza’s Government Plan says. “But we believe that states and societies have the right and duty to regulate the functioning of the market and to promote a pattern of national development based on production and innovation whose central aim is equality, sustainability and national diversity.”

Mendoza has proposed amending Peru’s constitution, specifically Article 60, which states that the state can perform at most a “subsidiary role” in business activities only when specifically approved by law in industries of national interest.

“I think the state should not be limited to merely a subsidiary role,” Mendoza told La Mula. “There are strategic sectors, not all, in which the state must participate and lead.”

“And let it be absolutely clear that we are not trying, like Alan Garcia [did in his first term], to nationalize the banks,” Mendoza told La Republica.

Will a Mendoza government increase trade between Peru and other countries? Will her government remain committed to the principles and goals of fellow Pacific Alliance members Chile, Colombia and Mexico?

Among Peru’s presidential candidates, Mendoza is the most vocal critic of the Trans-Pacific Partnership, which she has called “an attack on Peru’s sovereignty” and predicted it will cause an increase in the prices of medicines. She has signaled that her government would not ratify the deal.

The foreign policy section of Mendoza’s Government Plan calls for a “new policy in international relations.” The document mentions “sovereign participation” in political and economic blocs. While it specifies “strengthening the Andean Community and UNASUR,” there is no mention of the Pacific Alliance.

Prevalent themes in the economic section include income inequality, overdependence on extractive industries and the failure of the neoliberal model. It also calls for new state programs and strengthening existing ones to assist Peruvian businesses operating at home and abroad.

Mendoza would raise Peru’s minimum monthly wage from $217 to $290. When pressed on how a 33% increase in the minimum wage for the 30% of Peruvian workers who are formally employed would compel more employers to legalize their business, Mendoza replied that $217 is not enough to survive.

“There is a historic backlog of wages and by law it should have been reviewed,” Mendoza told El Comercio. “Just to recover the purchasing power they had in 2012, it should have been increased to $246. And to reverse informality … labor flexibility policies have failed.”

Mendoza’s Government Plan also calls for a reduction in Peru’s key interest rate to give small businesses access to credit. However, the autonomous central bank is tasked with controlling inflation independent of the government’s policy. Mendoza denied that she would look to bring the central bank under the control of Peru’s executive branch.

“We believe that is what a responsible central bank should do within the framework of its autonomy,” Mendoza told El Comercio. “And with three directors appointed by our government as well as a president we propose who is ratified by Congress, obviously these board members will share our vision. To be clear, I will respect the autonomy of the central bank. But in government, one assumes leadership to transfer their vision.”

“Our constitution states that there can be no monopolies,” Mendoza told El Comercio when asked if she were in favor of state price controls. “So how is price-fixing prevented? To ensure competition, there must be a state to regulate. We are used to just letting things happen. The same applies to the police and the judiciary. Fortunately, there are places where this thinking is changing.”

Mendoza is critical of the concentration of media in Peru, specifically the number of outlets held by Grupo El Comercio. Her Government Plan proposes to create limits in market share any one media company can attain as well as guarantee a minimum percentage of airwaves for nonprofit organizations. Her plan also looks to strengthen government and university media outlets.

“Don’t worry, we will not nationalize or expropriate any media,” Mendoza told La Mula.

Regardless of how far Mendoza’s policies would move Peru to the left, her political power is limited despite her current rise in the polls. While she is the leading liberal candidate, the left in Peru is highly fractured.

In January Mendoza’s Broad Front coalition lost a key ally in Sergio Tejada, whose Dignity and Democracy party is a liberal powerhouse. Mendoza has sparred on various occasions with former Lima mayor Susana Villaran, a liberal icon who has criticized Mendoza for her refusal to condemn the jailing of Leopoldo Lopez. For her part, Mendoza has criticized Villaran for joining the presidential ticket of Nationalist Party candidate Daniel Urresti.

Mendoza will also face difficulties in implementing her policies with a hostile Congress even if she is elected. Presidential frontrunner Keiko Fujimori’s Popular Strength party is projected to win over a third of the legislature. The business-friendly Peruvians for Change and APRA parties, led by Pedro Pablo Kuczynski and Alan Garcia respectively, are also expected to do well.

Because Mendoza does not seem to display the strongman tendencies of Hugo Chavez, a hard shift to the left for Peru is unlikely.