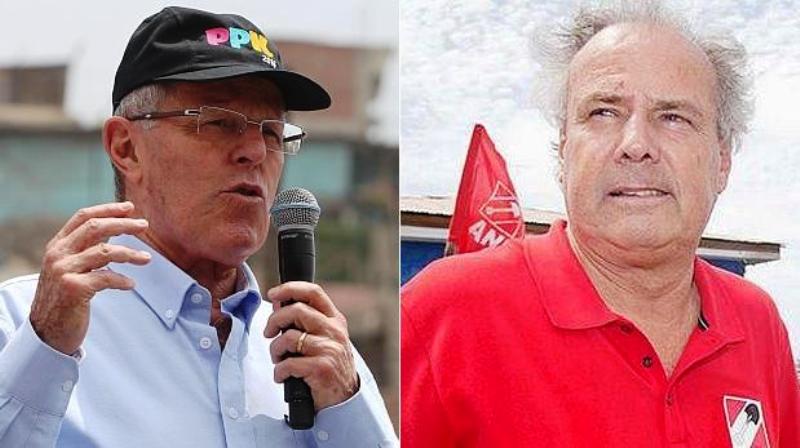 Liberal presidential candidate Alfredo Barnechea is increasingly attacking Kuczynski for what he calls poorly negotiated contracts during the government of President Alejandro Toledo, in which Kuczynski served as finance minister and Cabinet chief. On Friday night Barnechea even implied Kuczynski may have committed a crime in saying he would have him testify in court over the matter.

The Camisea fields are Peru’s top energy source, producing 1.6 billion cubic feet of natural gas per day. Just under half of production is sold to the domestic market at regulated prices. Most is used to generate electricity, another portion is allocated for industrial use such as in mining and a small percentage is sold to consumers for residential use and as motor fuel.

Many of Peru’s cars are fueled by cheap natural gas. Peruvian consumers pay some of the lowest prices in the region and the world for electricity. A study showed that Peru’s consumers saved $13.7 billion in electricity expenses in the 10 years after Camisea began producing in 2004.

The companies producing, transporting and selling Camisea gas have paid almost $8 billion in royalties since 2004, including hundreds of millions to Cusco’s state and municipal governments every year. An Inter-American Development Bank study showed that Camisea gas accounts for 0.08% of Peru’s GDP growth every year and that the Camisea project will add $23 billion to Peru’s economy over its 33-year life.

However the royalties Peru earns from Camisea’s exports have fallen sharply since the emergence of cheap gas from U.S. shale producers. Barnechea points out Camisea’s exports pay Peru just 10% of what Bolivia earns.

What was Kuczynski’s role in the Camisea contracts?

In 1986 Royal Dutch Shell discovered the Camisea gas fields in Cusco’s La Convencion province, a dangerous hotbed for Shining Path activity. Shell could never come to terms with then President Alan Garcia during his first term.

Ten years later, Shell struck a deal with President Alberto Fujimori in 1996. However that agreement broke down over Shell’s desire to export gas to Brazil and Fujimori’s insistence on keeping it for the domestic market. In 1998, Shell left Peru with nothing to show for its $450 million investment over almost 20 years since beginning exploration.

Exploiting Camisea’s gas ultimately needed more than $3 billion in investment. Energy firms balked at such a gamble in a country which, at the time, was one of Latin America’s riskiest political landscapes and offered the unattractive reward of supplying one of the region’s poorest consumer bases.

By the time Fujimori’s government fell in 2000, economic leaders in Peru knew that they had to offer an export option for any international company to invest the billions of dollars needed to extract Camisea’s gas and transport it to Lima. The domestic market of the time was too small and Peru’s government too unpredictable.

After 15 years of no progress on Camisea, the government of President Alejandro Toledo moved to free up potential investors to export some of the gas. Kuczynski, who served as Toledo’s finance minister and later his Cabinet chief, helped pass two pieces of legislation which allowed firms to export the gas from the smaller block 56 while fixing the price of the larger block 88 for the domestic market.

The new legal environment attracted a consortium of energy companies led by Argentine firm Pluspetrol who were willing to invest the money needed to build the facilities which would produce gas at Camisea. One of the companies in particular, Texas-based Hunt Oil, specializes in difficult projects which large, risk-averse companies won’t touch.

The consortium spent $3.7 billion to build the wells and extraction facilities, over 800 miles of pipeline which crossed the Andes mountains at heights of 15,000 feet in altitude, the Las Malvinas separation plant and the LNG fractioning plant in Pisco, Ica.

Production for the domestic market began in 2004, and exports began in 2008. In 2007 the Spanish firm Repsol, which forms part of the Camisea consortium, obtained the rights to export all the gas produced at Camisea fields. That same year Repsol signed a 15-year contract to export 70% of the gas to Mexico’s state electric utility, which pegs prices to the U.S. benchmark, Henry Hub.

Unfortunately, the shale producers in the United States drove the Henry Hub price down by more than half in the next five years, taking Peru’s royalties with it. To make things worse, the contracts Toledo’s government signed features a progressive royalty scheme which pays lower royalties when prices fall to ensure producers continue to produce, as opposed to reducing or even abandoning production.

While cheap gas in the United States has dragged down the price of Camisea gas committed to Mexico through 2023, prices in Asia are two to three times as high. The differential has prompted politicians from across ideologies to call for renegotiating the Camisea contracts to extract higher royalties, and the original contract has emerged as the greatest vulnerability for Pedro Pablo Kuczynski.

What do the candidates propose?

Alfredo Barnechea has led calls to renegotiate the contracts. But his critics point out that the government has little leverage over the Camisea consortium. The 1993 Constitution requires the state to fulfill its contractual obligations and also provides for a legal mechanism for foreign firms to recover damages from the state. If the companies of the Camisea consortium do not want to change the contracts, they do not have to.

While not obligated to renegotiate the agreements, Barnechea says his government will entice the companies to change the terms. However the government has little to offer outside, for instance, lifting the price ceiling on natural gas sold to the domestic market. But increased electricity rates can result in violent protests, as seen in Ucayali state this month.

Popular Action congressional candidate Carlos Herrera, who served as mining and energy minister under the transitional government of Valentin Paniagua and who backed initial changes in the law to free gas up for export, wrote in El Comercio that the consortium’s companies aside from Repsol will be willing to renegotiate to boost their own profitability. He does not specify how to get around Repsol’s contract with Mexico, whose prices are pegged to the Henry Hub.

One way to draw the companies currently involved in Camisea’s production to the negotiating table could involve new contracts with the Camisea fields which have not been developed yet. But given the extra investment that would require and the historically low price of gas, any new agreement sweet enough to entice energy firms to renegotiate the old ones may not be much different.

Broad Front presidential candidate Veronika Mendoza opposes any exporting of Camisea’s natural gas, and condemns the previous governments for not connecting the gas fields with Peru’s southern cities, including her hometown of Cusco, the provincial capital of the state where the gas is extracted from.

The Cusco congresswoman vows to end exports of Camisea’s gas, but has not detailed how she would legally do so. In addition to requiring the government to honor its contracts, Peru’s Constitution prohibits creating new laws or decrees to override existing contracts. Mendoza frequently calls for a new Constitution. She has also publicly commended the governments of Venezuela, Bolivia and Ecuador, all of whom have expropriated or nationalized the assets of foreign businesses.

Frontrunner Keiko Fujimori‘s silence on the issue leads one to believe she would not aggressively seek a change to the royalty scheme.

For his part, Kuczynski wants to drive more natural gas production from the Camisea consortium via exploration and exploitation of new fields and expanding transport infrastructure in order to continue driving demand. In what may have been caving to pressure during the heat of an election season, Kuczynski also vowed to renegotiate the Camisea contracts.

Camisea’s falling royalties are not a new issue in Peru’s politics. In fact, renegotiating the contracts were a key promise in President Ollanta Humala’s 2011 campaign. Five years later, the new liberal candidates are reviving the call. In what seemed an attempt to belatedly preempt them, Humala’s government announced that it was already in negotiations with the companies of the Camisea consortium.

However Humala also wants to grow Peru’s natural gas industry. The $7 billion Southern Gas Pipeline currently under construction will transport Camisea gas to Peru’s southern cities. Humala also wants to build a $3.5 billion petrochemicals plant which would use natural gas to produce 1.2 million tons of polyethylene per year. It the factory materializes, it would be the only one of its kind on South America’s Pacific coastline.

Given Humala’s term ends in July, renegotiating the export royalties is clearly not as simple as the candidates make it out to be. And expanding Peru’s natural gas industry will require more investment from the consortium currently licensed to produce Camisea’s gas.

Regardless of who is elected, the demands to obtain higher royalties will have to be balanced with the need to attract continued investment to produce more gas for domestic use in Cusco, Arequipa and Puno, as well as a potential plastics industry in Peru.