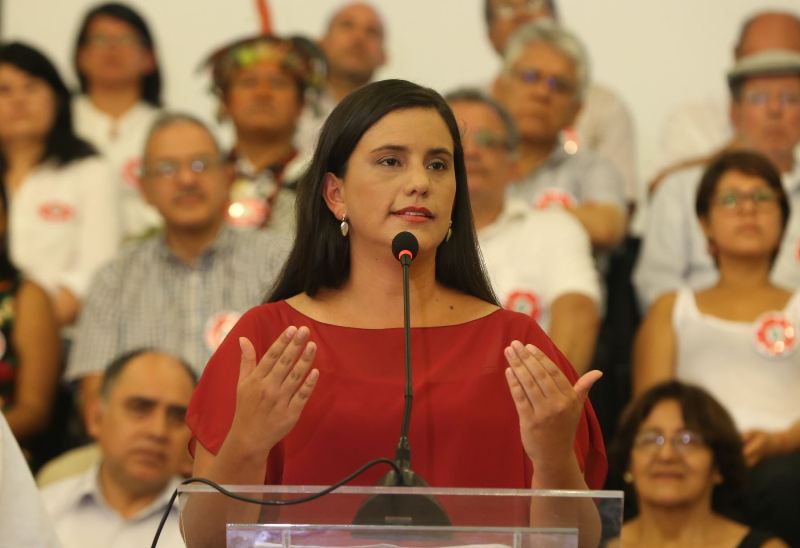 Veronika Mendoza, leftist candidate who did not qualify for a runoff in Peru’s 2016 election, has endorsed Pedro Pablo Kuczynski over Keiko Fujimori.

Mendoza had previously refused to endorse either candidate given that both represent a continuation of neoliberal economic policies. But the hard-left candidate who came in third place after the first-round vote said in a video published on YouTube yesterday that abstaining would play into Fujimori’s favor, and she called on her supporters to vote for Kuczynski.

“Today, Mrs. Keiko Fujimori is surrounded by people linked to corruption and drug trafficking. And she doesn’t even care. So what moral authority could she have to fight crime and drug trafficking? I do not want a country of corruption, drugs and violence for my children. I do not want a country where stealing, lying and killing becomes normal for my children.”

Mendoza’s endorsement comes as Fujimori has a five-point lead in the polls and seems poised to win the runoff vote on Sunday. After initially declining to endorse either candidate, Mendoza seems to have changed her mind by the likelihood of a Fujimori victory combined with recent scandals in Fujimori’s Popular Force political party.

A report by Univision and America Television revealed that Popular Force chairman Joaquin Ramirez was being investigated by the DEA for money laundering. In the wake of the scandal, Fujimori’s running mate Jose Chlimper provided the Panamericana television channel with a doctored audio recording in an attempt to discredit a key witness from the original report.

However Mendoza reiterated her opposition to Kuczynski’s policies and vowed to lead a loyal opposition party to his government. She called on Broad Front supporters to “close the book” on Fujimorismo politics.

“[Mendoza] represents a youthful vision of things,” Kuczynski told reporters Tuesday morning. He thanked Mendoza for “putting Peru ahead of her own, legitimate political interests.”

“[Mendoza] is Cusqueña and has often criticized the very poor negotiation which gave away Cusqueños’ natural gas,” Fujimori said at a campaign rally in Junin, referring to the Camisea gas contracts signed during the government of President Alejandro Toledo, in which Kuczynski served as Cabinet chief. “I regret that Mrs. Veronika Mendoza is not consistent with their proposals and convictions.”

Kuczynski and Mendoza garnered a combined 39.78% of the vote in the first round, compared to Fujimori’s 39.87%. Alfredo Barnechea and Alan Garcia, the fourth- and fifth-place candidates who garnered 6.97% and 5.93% respectively, have not endorsed either candidate. Both candidates have faced increased calls to endorse Kuczynski to prevent a Fujimori presidency.

Mendoza included the #KeikoNoVa hashtag in the title of her video, in reference to the anti-Fujimori movement which has held large demonstrations in Lima and other cities. Various groups have organized a second demonstration for tonight in downtown Lima. The march will begin at the Plaza San Martin and pass Plaza Grau before ending at Plaza Dos de Mayo.

Peru will hold its runoff vote on Sunday, June 5.