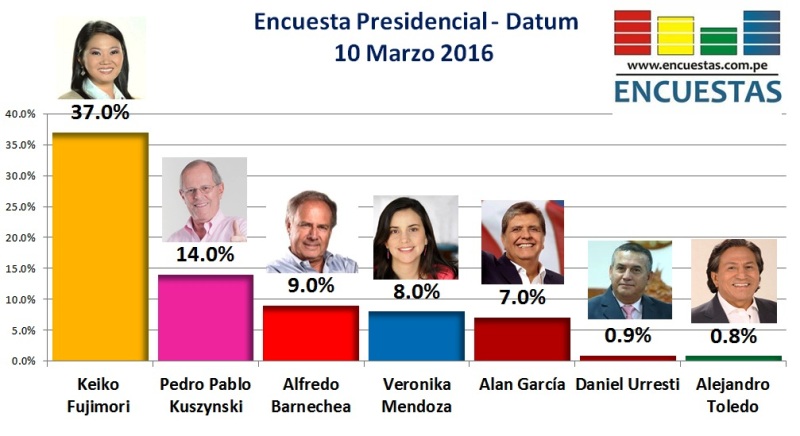 The disqualification of presidential candidates Julio Guzman and Cesar Acuña have propelled two new candidates into contention in Peru’s 2016 elections.

Both Guzman and Acuña have polled as high as second place since December. One poll showed Guzman in a statistical tie with frontrunner Keiko Fujimori in a hypothetical runoff. Both candidates were seen as “outsiders” by voters who want to elect a new face to head Peru’s government. With them out of the race, some 20% of total votes will migrate to other candidates.

A Datum poll taken last week showed that Fujimori commanded 37% of the vote, followed by longtime second-place candidate Pedro Pablo Kuczynski with 14%. Behind Kuczynski in third place was center-left candidate Alfredo Barnechea with 9%, and leftist congresswoman Veronika Mendoza took fourth place with 8%. Former President Alan Garcia was surprassed by Barnechea and Mendoza to remain in fifth place with 7%.

The rise of two liberal candidates dramatically changes the political landscape in a race which had previously been viewed as featuring all center-right candidates.

Alfredo Barnechea, a journalist with a Master’s in public policy from Harvard, has made the news for proposing to renegotiate the government’s license of the Camisea natural gas license. He is the candidate for Popular Action, the party founded by former President Fernando Belaunde.

Veronika Mendoza has vowed to check the influence of multinationals and big business in Peru while increasing public spending by more than 50%. Mendoza’s ascent makes her the first hard-left candidate to emerge as a contender to Fujimori.

While Barnechea and Mendoza certainly benefit from Guzman’s exit, most of the 47-year-old economist’s voters went to the former World Bank economist and political veteran Pedro Pablo Kuczynski.

Meanwhile, two former presidents will have to reassess their strategies and will to go on after having seen no boost at all.

Alan Garcia is perceived as having presided over the most corrupt government in recent years, punctuated by the APRA party’s involvement in the “narcopardons” scandal in which drug traffickers received pardons and commuted sentences in exchange for cash or services. Garcia has been heckled and even pegged with eggs and a bottle of water at two different campaign events as crime is voters’ top concern in 2016.

While Garcia did not see a bump with the disqualifications of Guzman and Acuña despite his alliance with the Popular Christian Party, former President Alejandro Toledo actually saw his support fall to less than 1%. In addition to investigations into his wife’s and mother-in-law’s purchases of homes in Lima, new rumors abound that Toledo has a drinking problem after he appeared inebriated during a radio show and at a campaign event.

Peru’s general elections are scheduled for April 10. A runoff will take place on June 5 if necessary.